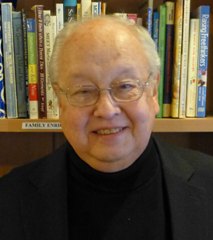 I traversed a road through a labyrinth of sorrow to the ultimate joy of Second Unitarian Church. During my wife, Jane’s, hospitalization before her death, Rev. Sarah Gettie McNeill was the chaplain assigned to her area of the hospital. As we got to know Sarah Gettie, we asked her about her Unitarian Universalist philosophy. She impressed me with her caring and open nature and her discussion of the UU philosophy and her path to becoming a UU. Then Jane passed away, and Jack Frost invited me to join the budding Widowers’ Club.

Jack attended Second Unitarian Church and suggested that I join him for services there. I accepted and, thus, through the confluence of Sarah Gettie and Jack, Second U and the Widower’s Club fill a substantial part of my life. Five members of the Widowers’ Club now attend Second U.

The genius of those who developed the three legs of our church’s philosophy and the welcoming personality of all its congregants convinced me that this was the religious home for me. My heartfelt thanks for those gifts.

I am often asked what the beliefs of our church are and I turn to those three legs—be authentic, compassionate, and transformative. Embracing those three precepts puts us all on the high road of conduct individually and as a congregation.

That, together with the collective personality of our congregation is the identity we should offer to others. We are a well-educated, thinking, caring, questioning, and welcoming people. I believe the response would be strong if we told others our story.

Our "Return to Building" Status

We are currently at the Red Level of our Return to Building Plan, as defined by Second Unitarian's Safety Task Force II.

Welcome! Let us know your interests so we can help you connect at 2U. More